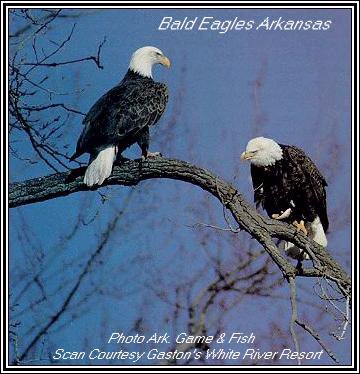 Eagle Watching In The Natural State

If your spine tingles at the sight of an eagle soaring majestically, then you're aware of the unique combination of beauty and efficient design that sets these birds apart from other winged creatures. The bald eagle's keen vision and skill in flight are legendary. While soaring at 500 feet, it can spot a fish from a mile away, then swoop down to it at 100 miles per hour. It's hard to top an outdoor lover's first close-up glimpse of an eagle in the wild for thrills and a lasting impression.

Don't worry, if you've yet to see a soaring eagle. They can't be mistaken for a hawk. Sheer size separates the two. An eagle has a wingspan of 6 to 8 feet when it's capable of flying at 10 to 12 weeks of age. Other than the California condor, the eagle is the largest bird of prey in North America.

Don't think it's necessary to travel to far-off places to see an eagle in the wild. Arkansas is a favorite wintering ground for bald eagles, and they are seen in nearly every part of the Natural State.

Adult bald eagles are easily identified by their white head and tail on a brown body. Young bald eagles are brown with some white spotting. The distinctive white head and tail feathers don't appear until the bird is about five years old and ready to mate. Immature bald eagles are often confused with Arkansas' other eagle, the golden. One major difference exists between the two. The golden eagle's legs are feathered to the toes, and the bald eagle has two or three inches of bright yellow leg showing. (For other characteristics, see the accompanying illustrations.) This difference is an indication of the birds' feeding habits. Unlike the golden eagle, that feeds primarily on small woodland mammals, the bald eagle frequents waterways feeding basically on fish and ducks in Arkansas. Because eagles also often feed on dead animals, they've been inaccurately accused of killing other animals.

Eagles soar in thermal updrafts, so chances of viewing one in the air are best when the temperature rises in the mid- to late morning. It's even possible to witness the courtship of bald eagles. Their courtship ritual includes aerial somersaults and other spectacular displays.

The eagles' arrival generally coincides with migrating waterfowl in late October. By early March, they return to warm weather haunts in southern Canada and the Great Lake States.

Eagle watching is increasing in popularity in Arkansas. Every January, volunteers throughout the state participate in counting the number of bald and golden eagles here.

Winter is the best season for eagle watching in Arkansas, particularly in January and February. The largest concentration and most settled populations occur during these months.

Severe weather can make eagle watching easier. For example, in January 1984, ice covered much of the state, and bald eagles congregated along the Arkansas River taking advantage of its open water. Eagle survey participants aboard the Corps of Engineers boat "Arkoma" recorded 142 eagles along a 24-mile stretch of river below Lake Dardanelle.

Knowledge of wintering eagle numbers and distribution in Arkansas and the Nation was limited prior to 1979. In January that year, the National Wildlife Federation sponsored the first multi-agency cooperative count of wintering eagles throughout the lower 48 states and portions of Canada.

Volunteers coordinate eagle surveys annually at major wintering areas. The census is conducted during a two-week period in January to minimize duplication in the count. Volunteers are also encouraged to plan activities around two predetermined target dates during the survey period. These surveys are used to more effectively protect and manage major wintering sites, because the key to viable eagle populations is maintaining suitable habitat.

Arkansas eagle watchers are enjoying a banner year in 1996. The survey recorded over 1000 bald eagles. Volunteers working with Arkansas Game & Fish Commission personnel reported the majority of these birds. Nationally, Arkansas ranks in the top 10 states for wintering bald eagles.

Annually, about 20 golden eagles are reported. This is probably low, because state volunteers center their activities around large bodies of water where bald eagles are more prevalent. Scanning Arkansas' woodlands for golden eagles is like finding a diamond at Crater of Diamonds State Park.

However, one location worth trying for a glimpse at this magnificent bird, is White River National Wildlife Refuge (NWR). Golden eagles are recorded during the Christmas Bird Count almost every year. Most are seen near large concentrations of ducks in the vicinity of St. Charles.

An excellent opportunity for seeing bald eagles is available for those who go to access points on big reservoirs in January and February, and scan the shoreline with a spotting scope or binoculars. During winter shad die-offs in the lakes, the best vantage points are just below the dams, where they are often seen swooping down for fish in the tailwaters.

All major Corps of Engineers' lakes in the state are blessed with good eagle populations each year. Check with local park rangers or naturalists for information on eagles at these sites.

Some areas along the Arkansas River are ideal for eagle watching from automobiles. Three areas in particular are the Corps of Engineers' park just below Dardanelle Lock and Dam; Holla Bend NWR near the town of Dardanelle; and south of Atkins on State Highway 105 paralleling the river for about five miles near Galla Creek Wildlife Management Area.

January is Eagle Awareness Month in Arkansas. Subsequently, many state parks have special programs for those wanting to see eagles and learn about them. Programs include expert-led, eagle-watching tours, film shows and sessions with authorities.

For more information on eagle-awareness activities, contact the Arkansas Department of Parks and Tourism, One Capitol Mall, Little Rock, Arkansas 72201; phone 501-371-7777. Many recovery efforts have been undertaken in the U.S. and some eagles are marked with color-coded leg bands and/or wing streamers. If you observe one with identifiable markings, please take accurate notes, and report your observation to the Game & Fish Commission immediately.

Unfortunately, there are still those who kill these spectacular birds. Killing either bald or golden eagles is a serious crime. It's punishable both in state and federal court and a conviction brings stiff fines and a possible jail sentence. Anyone who witnesses or knows of an eagle killing can best help the authorities by immediately reporting the information to either the Game & Fish Commission's toll free hotline, 1-800-482-9262; or the U.S. Fish & Wildlife Service at 378-5643. Anonymity is guaranteed to anyone calling the Game & Fish Commission.

This winter, bundle up and join the ranks of eagle watchers in Arkansas. You'll know why President Reagan said in 1982, " . . . to glimpse this majestic raptor, is to understand why the Founding Fathers chose it to represent the strength and courage of our great nation".

For more information on the annual eagle survey and how you can get involved, contact the Game & Fish Commission at 223-6300.